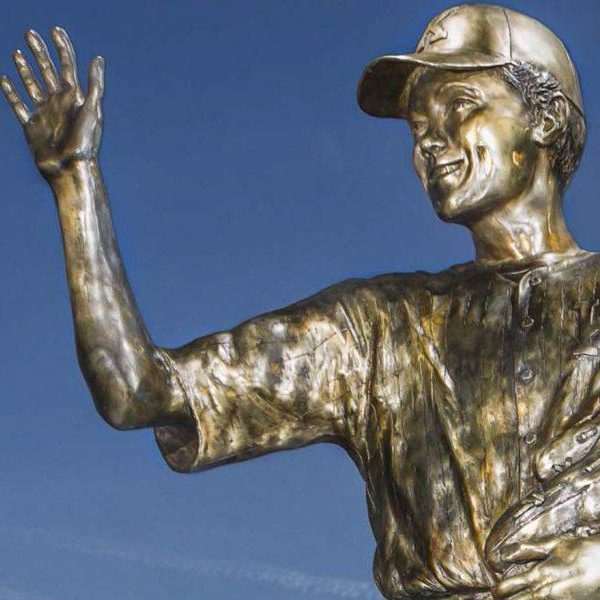 A life-size statue of a KPB ballplayer on the site of the original “Pony-Colt” ballfields commemorates more than 50 years of youth baseball played at the corner of Princess Anne Road and Kempsville Road. The player is captured in the post-game tradition of congratulating the other team on a “Good Game” and is surrounded by etched pavers that record a wide range of Kempsville memories over many years.​​

​A native of Manhasset, Long Island, this former Marine and retired Chairman of Boars Head Provisions in Brooklyn, New York, explored his growing interest in art, painting with oils and sculpting wood in his spare time. In 1983, Richard Stravitz moved to Richmond, Virginia and took early retirement in 1990 to pursue his lifelong love of art and sculpting full-time. These days, he has the joy of devoting himself to creating marvelous bronze pieces with the technique used by the sculptors of ancient Rome.

Employing the "lost wax" technique, Stravitz begins each of his works with wire and clay. After undergoing a few subsequent steps, part alchemy and part foundry, wax takes the place of the clay and then is melted away (hence, the "lost wax") inside a ceramic form, into which the molten bronze is finally poured, allowed to harden and then released into its final state.

Each of his pieces remain true to their subject, with muscle and sinew realistically wrought, magically revealed; the soul of the subject emerges as well. A compliment to his ability to capture motion and detail, Richard Stravitz is widely recognized for his distinctive ability to sculpt emotion.

Richard Stravitz is currently based in Virginia Beach, VA and owns two galleries in the area.