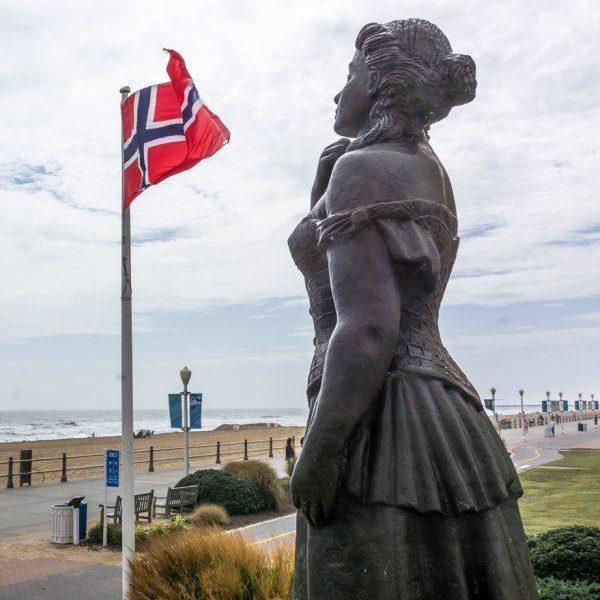 On Good Friday in 1891, the Norwegian barque "Dictator" was lost in the coastal waters of Virginia Beach near present-day 37th Street. The ship had suffered substantial damage after encountering bad weather on its journey from Pensacola, Florida. She planned to stop in Norfolk for repairs before heading to England with her cargo and then to her homeport of Moss, Norway.

Encountering more bad weather upon reaching the Cape Henry area, the “Dictator” ran aground on a sandbar about 300 yards from shore, her mast and rigging destroying the two lifeboats. Despite the valiant rescue efforts of members of the Seatack and Cape Henry Lifesaving Stations and the U.S. Lifesaving Service (a predecessor of the U.S. Coast Guard), seven of the 17 passengers and crew lost their lives in the wreck, including the captain's pregnant wife and young son.

After the sinking of the "Dictator," the ship's wooden figurehead washed ashore and was retrieved by the manager of the Princess Anne Hotel. He had the figurehead placed in a vertical position facing the ocean as a memorial to those who lost their lives in the shipwreck.

In 1953 during Hurricane Barbara, the wooden figurehead, now known as the "Norwegian Lady," was badly damaged and subsequently removed. After the loss of the original Lady, community interest in Virginia Beach and across the Atlantic in Moss, Norway, led to a drive to replace the memorial. With a substantial grant from the Norwegian Shipping Association, Norwegian sculptor Ornulf Bast was commissioned to create two nine-foot bronze replicas of the original figurehead in 1962. One was placed on 25th Street in Virginia Beach, and the other was erected in Moss, Norway, which was officially named the Beach's "sister city" in 1974. Each statue gazes across the Atlantic, giving the appearance of facing her sister.

On the pedestal of the Virginia Beach statue, the following words are inscribed:

"I am the Norwegian Lady. I stand here, as my sister before me, to wish all men of the sea safe return home."